I've still been thinking about love. English is confusing, and it's all I know well enough to express myself. I don't know Greek, but I know there are several words that get translated as love. I've wondered if Eros might be less confusing in Greek. Agape is charitable love. Not just money, but being friendly to everyone. I still can't even be in a group of people very comfortably, I start to get pretty overwhelmed until I know people. Hopefully my own life and the rest of the world will continue to become less of a mess. I'm not a lover or a fighter, but I know I want to show love correctly. I was raised that way. At least we're not cavemen. There's an ebb and flow.

In our globally connected world, a lot of people end up feeling very excluded. I would have been a NEET, except my parents were always sure I was in some kind of education. I know the image of shiny technology well. I don't know electronics all that well, but I've attached a rudimentary schematic of a simple robot someone could build. It has only a battery, two light sensors that operate two power transistors that operate two motors. The parts should all be selected to be compatible, the voltage of the battery has to be correct for the motors, etc. I drew this from memory, so hopefully it's correct. The parts to look up on the schematic are batteries, photoresistors, transistors, motors, and wires. Remember the motors have to be connected on the opposite sides of the robot that the photoresistor light sensors are on so that if there is more light on one side, the motor on the other side will go faster. Make sure the transistors can supply enough current to drive the motors. 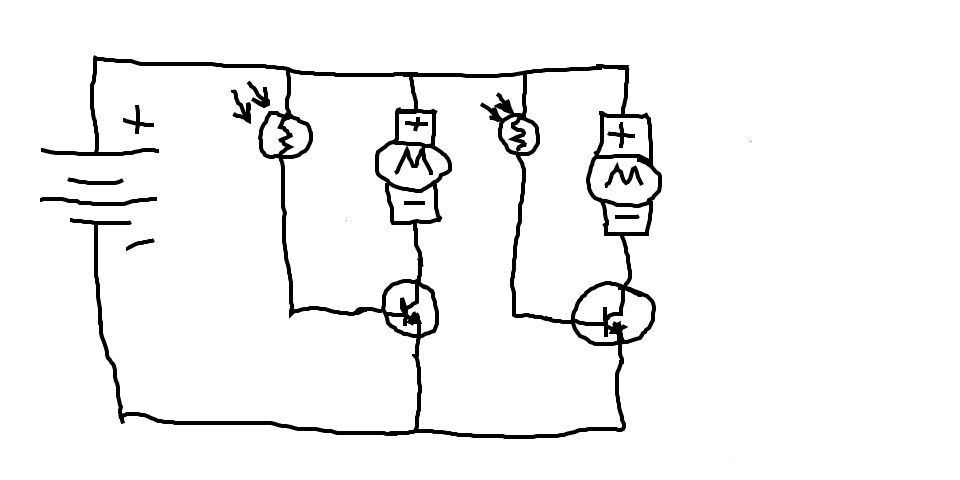 I know everyone has a lot to offer the world with the right education for themselves. Upeksha is a Sanskrit word which means acceptance of differences. Maitri is friendliness. Mudita is the opposite of Schadenfreud, feeling happy for others' happiness. Karuna is understanding someone else's pain.

I know there are classes on lifting things properly, that isn't covered on the GED. I got my GED. I had a lot of education though, in things like being part of a team building robot citizens that could be part of society. They could facebook for us, do heavy lifting, etc. They could go into hazardous environments without fear of the destruction of their physical bodies because their minds were running in a completely different location. All sorts of things like that. The etymology of the word "robot" comes from Slavic words for "work." In the Bohemian Republic, Robota were forced labor camps. I see the problems with it. Most of us feel a sense of purpose from doing things, and most of us are quick to reject difference. I've never really worked a job in this field. I haven't quite graduated, and there's no GED for university. If you know this field, you can look at my work and know I'm being honest here. If you know this field, however, you are unlikely to understand heavy lifting. I'm naturally anxious. I've always worried a lot. I have so many white bears, I'm going to pick the blue dolphin now of hope.

AI is past its bootstrap point. For a while now, those who know it have been playing the part of defendant for humanity, or worse, all life, in the courtroom of how we lead our lives.

Baby stoat is a youtube star. Everyone has seen him. A very bad man tracks him down and kills him brutally. As baby stoat lies mangled and bleeding out, AI from the far future finds a way to save his consciousness. The AI plugs baby stoat into the machinery, keeping him alive, expanding his mental capacities, explaining it all to him until he understands everything. Baby stoat sits in the machinery in the far future, where he serves as the judge of humanity's fate.